“Filmmaker Hardy D Saleh contacted me about video he was making of the youth climate strike, and asked if I would write a song for it. He filmed the protest march in central London and sent me interview clips with those taking part. The song came to me as I listened. It was incredibly moving to hear these children expressing their passion for the planet.

The response of our government, national institutions and large corporations clearly does not reflect the gravity of this situation. Hardy titled the film “Our House Is On Fire,” after a quote from Greta Thunberg. I wanted to capture in the song both the intense urgency of this global crisis as well as the possibility we still have to turn things around, and the efforts of young people all over the world to make this change happen.”

“she makes music with her soul…a real masterpiece” – Lefuturewave

“the exact message the modern environmental movement needs.” Give Me A Try 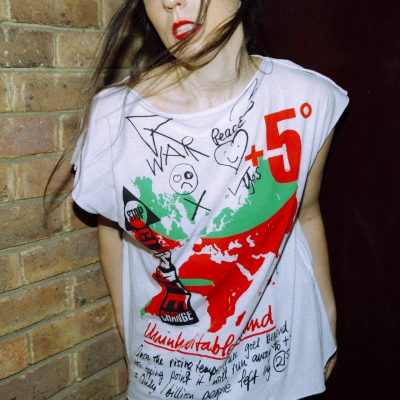 The “Uninhabitable Land” t-shirt Luna is wearing in the single’s cover art is by Vivienne Westwood, herself an outspoken climate change activist. In her words:

“The revolution has already begun. The fact of man-made climate change is accepted by most people. This map is the world at five degrees [higher]. If you draw a line parallel with Paris, everything below that is uninhabitable. This means, by the end of this century, there will only be 1 billion people left. Our politicians are preparing for this. They are not trying to stop it, they are preparing for it.”